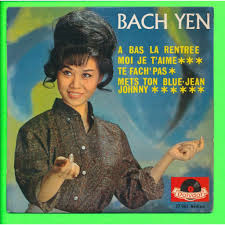 Bach Yen (1942-     ) is an acclaimed multilingual songstress originally from Vietnam.  Signed with Polydor Records at age 19, Bach Yen was the first Vietnamese recording artist to reach international prominence with her abilities to sing effortlessly in six different languages which include English, Italian, Spanish, Hebrew and her two native languages, French and Vietnamese.  In the 1960s, she became a popular musical artist guest making appearances on various American television programs hosted by Ed Sullivan, Joey Bishop, Mike Douglas, Bob Hope, Pat Boone and Bing Crosby, as well as Shindig.  Bach Yen went on to share the stage with the likes of major worldly renowned entertainers such as Liberace, Frankie Avalon and Jimmy Durante on major concert live shows throughout the United States and other countries of both North and South American continents.  Being the first Vietnamese performer to tour the four major continents where she played to mostly non-Vietnamese audiences, Bach Yen would earn for herself the title of being South Vietnam’s unofficial ambassador of performing arts.  Bob Hope had introduced her on stage as the Cinderella from Saigon.

Her name translates as “White Swallow” in English.  Born in Soc Trang, a town located in the Mekong Delta, to an ethnic Chinese father and Vietnamese mother, Bach Yen started singing at the age of nine when she joined the school of La Providence church choir in Can Tho, of which she had attended as a grade school student.  In 1953, Bach Yen traveled to Saigon where she competed and won first prize in a youth talent contest.  Her prize winning entailed a weekly singing stint on a children’s music program for a French broadcasting radio station located in Saigon.  The following year, the French would be defeated at the end of the First Indochina War which directly resulted in the French losing control of Vietnam as its colonial conquest.  For the French colonists that were living in Vietnam, this meant that the time had come to close up shop and return home.  For the little girl named Bach Yen, this was a sad time as the French-owned radio station which hosted the weekly children’s program where she had been a principal performer would shut down.  This coupled with her parents’ separation with her father moving to Phnom Penh leaving her mother alone to care for Bach Yen and her siblings in a small rented house in Saigon proved to be of challenging times.  To supplement the family income, Bach Yen along with two siblings and two cousins formed a circus act as motorcycle riders which had toured all across South Vietnam until a near fatal accident took place where she had fallen while on her motorcycle twelve feet to the ground.  After a long period of recovery, while only 14 years old Bach Yen embarked on a professional singing career when she landed her first steady gig as a nightly performer at a cabaret in Saigon called Truc Lam.  In a short amount of time, she had earned quite a reputation among the nightclub circuit of performers in Saigon which would allow her to grace the stages of the largest and most popular cabarets and venues in the city such as Tu Do, Anh Vu and Hoa Binh.  At the tender age of 15, Bach Yen gained national recognition with her interpretation of what would become her signature Vietnamese song throughout her career, Dem Dong (Winter’s Night), written by Nguyen Van Thuong. 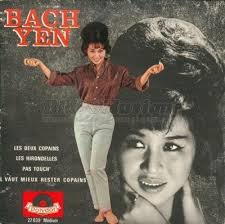 In 1961, Bach Yen left her native Vietnam for Paris, France to set her sights on pursuing an international music career.  While in Paris, she landed a steady gig performing nightly at the prestigious Table du Mandarin.  This was the same cabaret venue that had also housed another performer of Vietnamese origin, Henri Salvador’s protégé Tiny Yong, and to a lesser extent, Bich Chieu, who had gained prominence as a performer at nightclubs back in Saigon.  A contract with Polydor Records would shortly follow for Bach Yen where she would record three albums and appear on several music videos which aired on the then massively popular Scopitone, a jukebox of music videos and the European equivalent to MTV of today.  Unhappy with the popular style of music known as Ye-Ye Polydor had chosen for Bach Yen, after three years she decided to leave Paris and return to her native Vietnam where she would resume her career as one of the top performers in the most well known cabarets of Saigon. 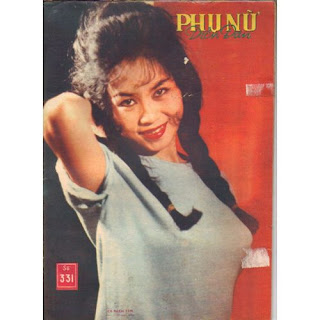 Her return stay in Vietnam would not be for long, as she would receive an invitation from Ed Sullivan in 1965 to appear on his renowned show.  What was originally intended as a two week engagement in the United States resulted in her taking up residence there for a total of twelve years.  During the years spent in the United States, Bach Yen had become a popular guest on television variety shows and continued her career as a recording artist.  In 1968, Hollywood came calling when she was invited to make a cameo appearance in John Wayne’s movie, The Green Berets.  Bach Yen also often played Vegas as a popular headliner performing alongside Liberace and toured extensively across the globe with some of the biggest names among mainstream American entertainers.

Upon returning to Paris in 1978, Bach Yen met up with renowned, accomplished Vietnamese ethnomusicologist Tran Quang Hai.  This sparked a renewed interest of Vietnamese music in Bach Yen’s career.  Upon becoming a wedded couple, the two have continued in collaborations focused on traditional Vietnamese folk music.  They have recorded and released a total of seven albums together and made over 3,000 recitals and concerts in five continents.  One of their albums, Vietnam, was awarded with the Grand Prix du Disque from the Academie de Charles Cros in 1983.  In 1994, Bach Yen recorded Souvenir, an album comprised of some of her most popular songs in her repertoire performed for live audiences throughout her career in four different languages:  French, English, Italian and Vietnamese.  Bach Yen has also made several memorable appearances on the immensely popular live show video series, Paris By Night, produced by Thuy Nga for Vietnamese audiences worldwide including a duet performance with singer Tran Thu Ha.  In recent years, Bach Yen had made a triumphant return performing in concert for the first time in over 44 years in her native Vietnam in 2009.  Five years later, she would be invited back to Vietnam for another live concert performance held at the Hoa Binh music venue in Ho Chi Minh City where she played to a packed audience.